The Quran, in numerous passages, invites its readers to reflect.  It is thought provoking reflection that connects us to our reflective tendencies.  The deeper the connection we have with our soul the more enriched we are with God-Consciousness.   The Quran describes three distinct states of the human soul and its effects on human behavior.

The better we understand the human psyche as managers, the better we become at mastering the social science of management and at managing organizational affairs.

To understand the wisdom behind Islamic management principles, we must first understand the inner working of human psyche from a physical, emotional and intellectual perspective. One of the greatest Muslim theologian, jurist, philosopher, and mystic in Islamic history, Imam Al Ghazali, known as Algazel to the west, has written extensively about the inner working of the human psyche.  Al Ghazali identified three systems that encompass the human psyche; an Emotional system, a Behavioral system and a Cognitive system (Crook, 2008).

All three systems are constantly in motion, similar to a pendulum depicted in the figure.  When Al Ghazali’s systems are integrated with the states of the human soul we begin to understand the various characteristics and personality traits within us that help define our inner reflective tendencies. 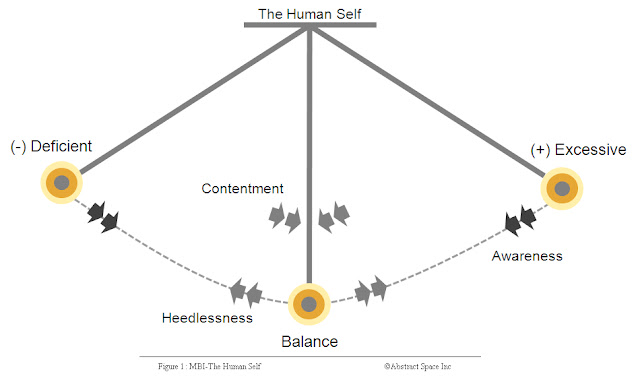 Excessiveness within the Behavioral system creates management systems that are driven by recklessness, where negative consequences of behavior are completely ignored in order to meet shareholder expectations.  British Petroleum’s (BP) inability to heed the warning signs about safety and health issues at the Deepwater Horizon drilling rig is a great example of this type of imbalance where innocent lives were lost, the livelihood of thousands was destroyed, and ecosystems and tens of thousands of miles of coastline were damaged.

Similarly, deficiency within the Behavioral system creates management systems that are driven by cowardice, where decisions are made to correct present deficiencies at the expense of the future.   The reckless benchmarking practiced employed by many state and local public retirement fund managers that have allowed   public entities to draw on retirement funds inappropriately to fill budget gaps over the last decade, is a perfect example of this type of imbalance.

When we apply Ghazali’s theory to the collapsing economies, financial bailouts, status downgrades, and political/social unrest, we clearly see the imbalance of our collective human psyche, reflected in our societies. The gluttony that exists in our corporate world, the disparity of income between the rich and the poor, the amount of debt we carry, the armed conflicts we have created, the rate at which we are depleting our natural resources, are all clear signs of a deficient collective psyche.    How can the social science of Management be mastered with a deficient psyche?  The Quran states:

The fundamental concept of ethics and morality is pre-wired in all human beings.  It allows us to differentiate between good and bad, right and wrong, equality and injustice.  It all begins with the ability to reflect inward and continually manage the swinging of our psyche’s pendulum. Maintaining such inner balance requires a conscious and sustained effort.  This constant effort is considered the highest form of struggle (jihad) in Islam. It is this constant struggle that gives birth to God-consciousness.